On Sunday, I went along to Fort William, for the World Cup Mountain Biking Downhill races. In the rain (of course), mud, sludge and  midges (bastards).  I think I'm definitely a better and stronger person for it though. And the men and women that ride in such competitions? Hardcore. Congrats to Aaron Gwin of America (fuck, yeah!) and Emmeline Ragot of France (oui! oui!) for winning on Sunday.

Obviously as a Canadian, I was supporting Canada's own, Steve Smith. Sadly, he had a crash on race day but nevertheless, he did manage to get in *just* under five minutes. How all the riders didn't crash out - I don't know. I mean, check out the run!


More Mountain Biking Videos" target="_blank">
More Mountain Biking Videos
We took the gondola to the top of the hill at the start of the race and proceeded to walk down to the base. At one point, I was confronted with yet another mass pile-up of mud and sludge, and I may or may not have stormed off like a spoiled princess - announcing that I didn't care if I missed the race; I was not going to traipse through yet another mud pit of filth (unless I too was on a bike). So, instead of following the rest of the spectators, I took the emergency vehicle road to the bottom of the hill, thereby missing about 15 - 20 minutes of the race. It was worth it though - for everyone's sanity. 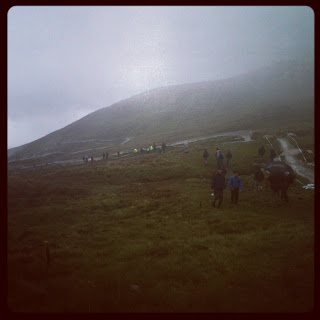 Before it all went wrong and bit muddy 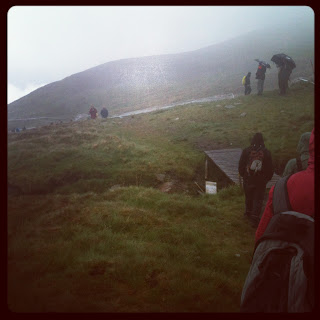 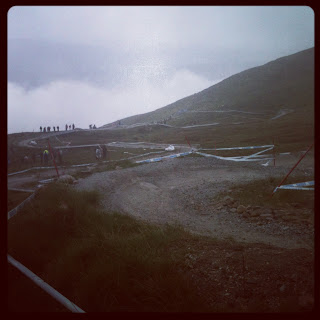 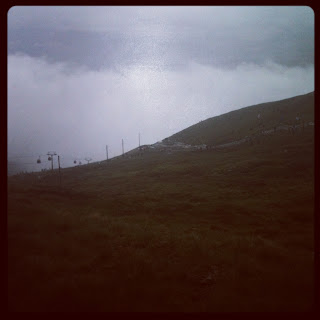 On top of the world 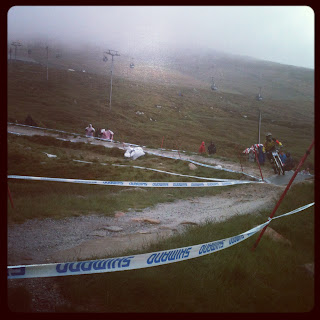 Just one note of suggestion though - since people weren't allowed to drive to the actual event (which was fine by me), you had to take buses from various points around Fort William, that transported everyone to the site. However, at the end of the race, it really sucked to stand in the rain for an hour waiting for a bus back into town. I got to thinking, why doesn't someone like Trek Bikes, sponsor rental bikes to and from the site - a la Barclay Bike Hires in London? Wouldn't that be really clever, fun and economical?
Posted by Jennifer at 10:28 PM