My Guide to Dating Scottish Men 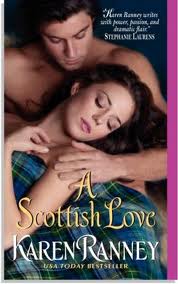 *Not a true representation of "Scottish Love"

I get a surprising amount of emails from women - mainly American and Canadian - about dating Scottish men: e.g. what's the difference between a Scottish vs. North American dude; what does it mean when a Scottish guy asks them out for a drink with all his friends and so on and so forth. Most of the time I respond because they're just looking for advice/ perspective and as everyone knows, I have publicly lamented about dating in this country so I am more than happy to pass on what I have learned, if anything.

Nevertheless, I thought I should try and attempt to offer up my advice once and for all - albeit, at the risk of repeating myself.

Please note, however, that I am approaching the dangerous and controversial territory of dating in Scotland, from a North American perspective, and you may run the risk of being misinterpreted as "too forth right".

Firstly, I won't question why it is a Scottish man in particular that you want to date because hey, I get it: you saw Gerard Butler in a film once and dug his accent and assume that all Scottish men are that rugged and handsome. [Side note: I saw Gerard Butler walking down Byres Road a couple weekends ago with this current-model girlfriend, and although my heart was a flutter at the idea of Gerard Butler, in reality it was a bit of a let down as he looked pretty hung-over].

As a Canadian dating in Scotland, I initially found it quite difficult as there isn't the same culture/ tradition of dating as there is in North America. Back in Toronto, it wasn't considered strange/ too forward for a guy to approach you and either: (a) just start talking to you SOBER and/or (b) offer to buy you a drink. The same cannot be said about Scottish men, I'm afraid. Which brings me to my first point:

1. Scottish People Speak in Code: This takes some getting used to. For example, it's not really polite to directly ask someone what they do for a living. Sure, that is the second thing we ask each other in North America, right after "What's your name?" but not so in the UK. So instead, you need to find these sort of details out in a roundabout way. You will need to carry out a careful conversation and only when it is hinted at, may you ask someone what they do or openly try to guess. The same can be said about asking someone if they're single/ married. Sure, you may be used to being directly asked this by a dude in Canada but over here? Not so much.

You see, here in the UK/ Scotland, there is a lot more happening than what would appear on the surface. For example, in a busy bar, rather than a barman/woman openly asking who is next (although sometimes they do), there is a subtle social interaction taking place. Without uttering any words, the server will know who is to be served next, just by making eye contact with thirsty patrons at the bar. If the server incorrectly eyes someone who is not next in line for a pint, they will usually shake their head and point at who should be next - if they're a decent human, anyway. Obviously if you're a patron at a busy pub in the UK, you can't wave your hands or make a point of being FORTH RIGHT and saying that you're next; SORRY, that's just the rules, Yanks. What can I say, they like rigid social codes over here.

So, if you happen to find a Scottish lad who you like and you think may like you, I would say this: HANG IN THERE, GIRL. Eventually all will become clear (hopefully).

The thing to remember about guys - Canadian, American, Scottish or otherwise - is that they tend to show you how they feel. Sure, they may not literally tell you but on the other hand, if they're making an effort to see or arrange to see you: what's that telling you? Which brings me to my second point:

2. Scottish guys - on the surface- have limited emotions. Look, I don't make the rules, just the observations, ok? But in my experience, there seems to be a more old-fashioned approach to how men are perceived and portrayed in the UK than in Canada. In Glasgow, at least, people talk about the "hardness"of the cities inhabitants; it's not called a Glasgow Kiss for nothing and Glaswegian men are allowed to show limited emotions: anger (usually when their football team loses), elation (usually when their football team wins) and general day-to-day being at peace with the world. That's it.

Now, obviously this is a sweeping generalisation and not true of all Scottish men. Indeed, I would say that it's rapidly changing for the better. However, I still think there is some hang over from the "olden times" when it was generally encouraged for men to be the "strong and stoic" type. Clearly I don't approve of such encouragement because I think it's important to remember that men are a lot more complicated and dare I say it, delicate than we let them be.

So, remember: there is a person beyond that limited Man Box exterior.

3. (a) You might need to go to the pub more: Look, we'll probably never even come close to what our Scottish cousins can partake in, booze wise, but you might as well start trying: if you can't beat 'em, join 'em, right? Sadly, this is where a lot of the action is. In Canada, we usually go to other people's houses to get shit-faced but over here, people go to a pub in order to pay twice as much to shout over loud music. The one thing, however, that you won't get at a lot of Canadian house parties is one thing that the Brits/ Scots excel at: playful banter.

3(b). Scottish people love and appreciate a good chinwag/ banter. There are many things I love about Scotland and Scottish people (humour, landscape, friendliness) but the one thing that really makes me fall for this country is their sheer delight at a good chat/ rant session. Whereas we Canadians are a lot more utilitarian when it comes to words, the Scots are playful and cheeky. If you want to date a Scottish dude, be prepared for some verbal jousting; these people can talk rings around us.

4. Scottish people don't really date: I said it before and let me elaborate more: Scottish people don't have the dating culture that we do in North America; they don't even like to say the word, "date". The word and idea makes people uneasy - perhaps it is, once again, too forth right and too straight-forward (I KNOW, RIGHT?!) Scottish people wouldn't think too much about sleeping with a near stranger they met in a club, but asking for their number and to take them out for a meal? No.

This isn't a judgement on a nation - just a mere lifeline for confused North American ladies.

5. Get used to having the "piss" taken out of you: So you find yourself on a NON-DATE/ JUST HANGING OUT WITH a Scottish dude but he seems to continually make fun of you. Don't be offended rather, chin up, doll, this means he likes you!

This past weekend was the Track Cycling World Cup in Glasgow, at the recently opened Sir Chris Hoy Velodrome; the first event to be held at the Velodrome. When tickets went on sale for the three-day event, they sold out in less than an hour. Luckily, G was on form and managed to get us two tickets to Saturday night's events. Saturday's events consisted of:

It was such a fantastic and exciting night; I absolutely loved watching the keirin and elimination races. Even more impressive was the velodrome itself and I am so excited that we weegies finally have our very own velodrome - not too many cities can boast of such a thing. Very shortly, G and I are going to our first accreditation session at the velodrome, in order to get certified so we too can cycle on it. 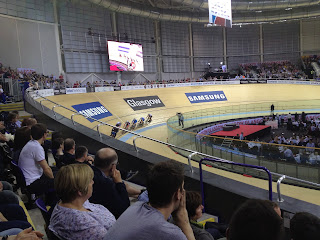 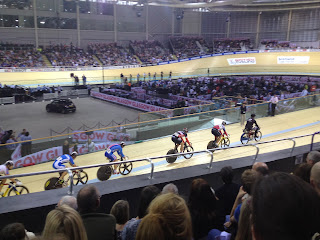 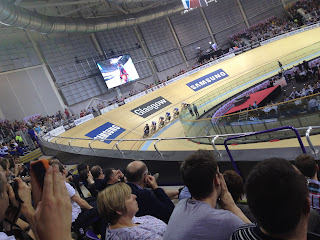 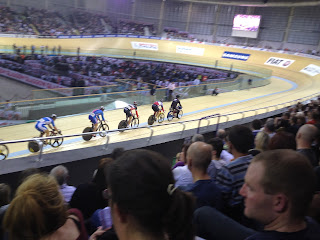 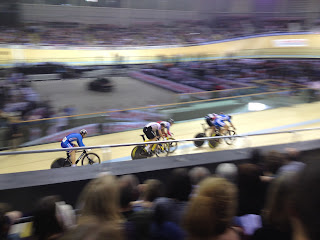 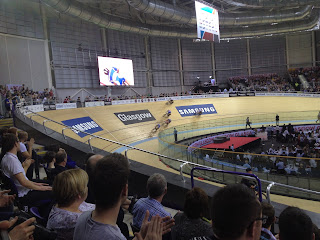 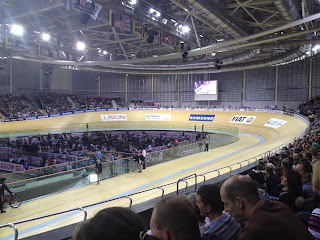 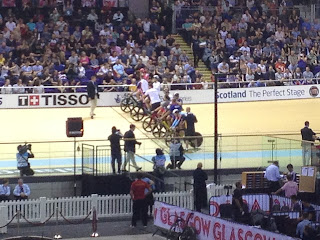 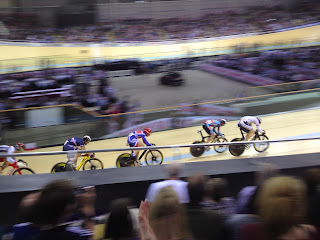 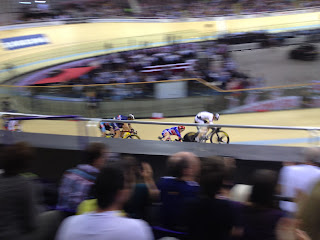 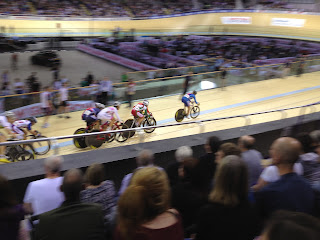 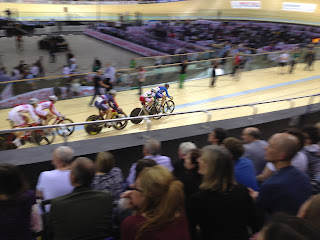 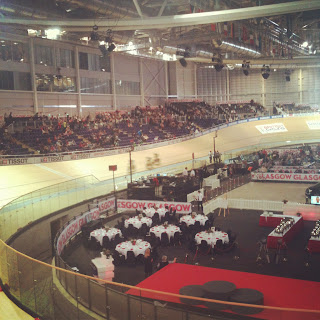 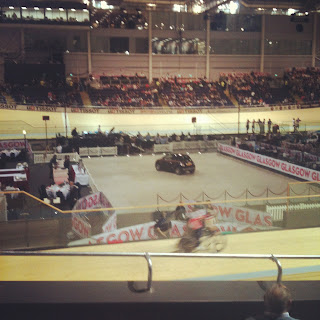 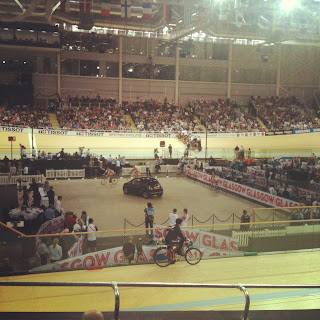 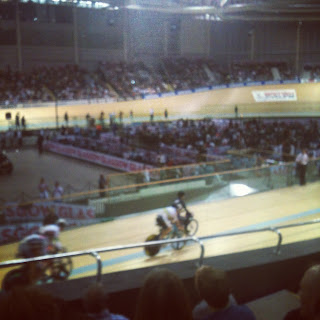 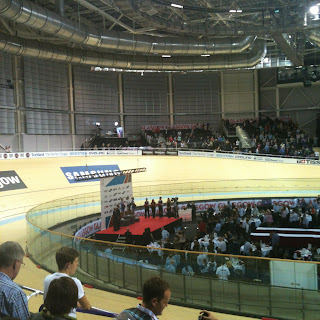 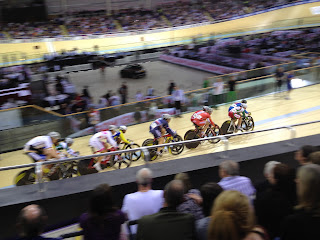 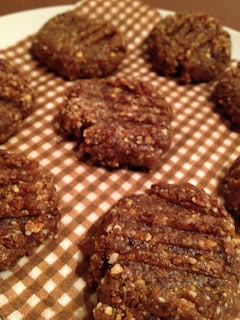 And finally, I've been experimenting with sugar-free baking/ cooking and made some raw "peanut butter cookies". Inspired by this recipe, I mixed it up by making these "cookies" with raisins, peanut butter (the no sugar added variety, obviously), hazelnuts and extra vanilla extract. Delicious!
Posted by Jennifer at 10:26 PM No comments: 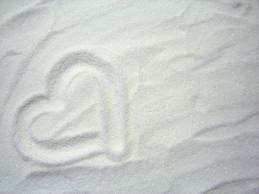 I've decided to go sugar free - until Christmas, at least. I'm going to try and document my struggle journey, as I go. If you're interested, I'll be posting about it on Sweets Free. I'm going to leave this blog dedicated to kvetching and ranting about Scotland, as per usual.
Posted by Jennifer at 10:43 PM 1 comment: