AN ODE TO THE SMALL BUT MIGHTY ADRENAL GLANDS

Remember that health scare I had back in the summer? Well, thankfully it's (almost) over.

To cut a long story short, doctors found what appeared to be a 7cm cyst on my right kidney. It didn't appear too sinister, however, as a lot of people (although usually over the age of 50) have kidney cysts and don't even realise it.

However, after further unsavoury tests and being passed around various doctors, it turned out to be attached to my right adrenal gland. Indeed, it was engulfing my right adrenal gland because it was so beastly in size. What are the adrenal glands, you ask? Oh, just two wee glands that sit atop your kidneys ("kidney hats", you might say), and without which, you would die as they are essential for day-to-day life. Prior to this episode, I had never heard of them; now I am in awe of all the intricate matters of life they are responsible for.

And so, after about 1.5 months of waiting, my time was finally up and last Tuesday, I went in for surgery to have my right adrenal gland and its uninvited houseguest removed via laparoscopic surgery. It was my first time experiencing surgery of any kind as well as anaesthetic. And now, after experiencing both, I am actually astounded as to how anyone would ever opt to have elective cosmetic surgery!? The effects of anaesthetic, on me at least, were intense; I went under as a healthy and active 33-year old and awoke as an exhausted, chain-smoking old woman. No one really warns you how tired you feel afterwards and worse, no one really told me (apart from my physiotherapists), to expect to cough up almost an entire cupped hands worth of phlegm (gross, I know).

Anyway, I am so thankful for all the care I received over the last few months - especially from the anaesthesiologist at Gartnavel General, who didn't dismiss me or my fear of needles/ IVs and offered me diazepam and hand-numbing cream; nor did she laugh when I asked, "where do you go when you're put under?" Apparently you don't dream and it's not really sleep - you're just .....really really passed the fuck out, like in a coma? They're still not really sure, apparently. There's a really interesting interview from NPR worth listening to, if you're fascinated/ weirded out by it all like I was.

I am also grateful to the kind nurses who helped me recover when I was in hospital, following surgery. It also goes without saying that I am eternally grateful to my Mom, who flew all the way over from the West Coast of Canada, to be here with me during surgery and after. Not to mention my supportive and grounded friends, who calmed me, answered my questions, took me to appointments and held my hand as I fainted during tests. And to my lovely boyfriend, who didn't fob me off when I sobbed, thinking it was the end of the world like a true drama queen. Thank you.

Now on to the gruesome and gory pictures. Close your browser now if you don't want to see post-op pictures and NHS food. 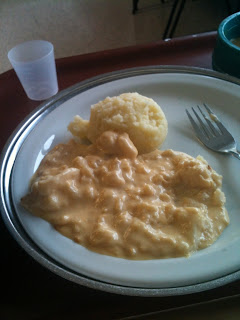 So, you've been fasting for 24 hours and wouldn't mind some dinner to help speed up recovery. You enquire about the veggie option for dinner. You're told it's cauliflower and cheese, with some potatoes. You lift the lid and lo! It looks like the post-morphine puke you did earlier, all over yourself, in the wee hours of the morning. MMMmmmm..... 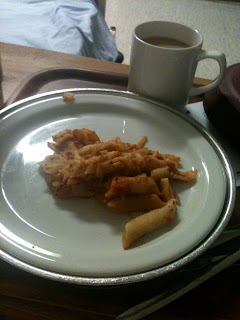 Following night's veggie dinner was tomato and basil pasta. Dessert was ginger cake, smothered in custard (blech). The tea, however, was ace. Fellow patients in my ward dined on fish and french fries. Anyone else find it odd that hospitals are feeding people french fries? Just me? 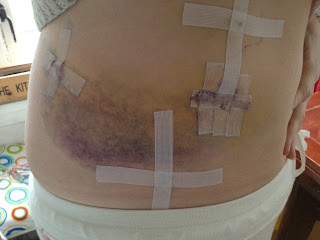 Seriously though. Thank the mighty Aneurin Bevan for the National Health Service, even if they do still have visiting hours (grrrr....)